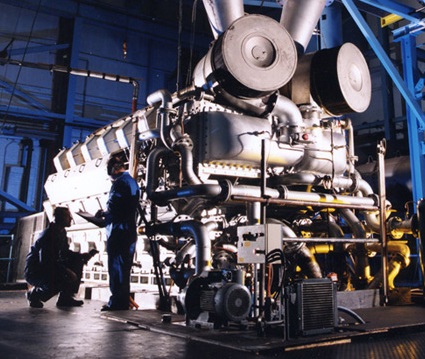 Allen Diesels are able to offer a wide range of outputs from their current range of medium speed engines. Individual engine outputs from 480 kW to 6MW are available and can be configured in single and multi engine installations. Engines can be supplied to run on various fuel types including diesel, heavy fuel, crude oil and gas. The robust design of the Allen engines makes them reliable and well suited to running for extended periods, often in remote areas.

With 1,200 engines (in excess of 10,000 cylinders) in active service around the world, the Allen Diesels  spares and service departments offer comprehensive support to all owners and operators of Allen engines. As well as supplying spare parts, the company offers a range of upgrades and modifications to existing engines.

What we do for Allen Diesels Ltd

We provide a design draughting support service to the Allen Diesels engineering department. Working closely with their engineers, we produce layouts, detail, assembly and arrangement drawings in both 2D and 3D. These include castings, fabrications, machined components, pipes and site arrangement drawings.

Examples of some of our work

An oil pipeline company in South America operates a large fleet of Allen engines which were supplied in the 1980’s. The engines have been well maintained and still have a number of years life left in them.  Unfortunately, the turbo-chargers fitted to the engines are obsolete models which are no longer supported by the original turbo-charger manufacturer meaning spare parts are not available. To keep the engines running reliably, Allen Diesels needed to be able to offer an upgrade package.

The Allen engineering department selected a couple of options for possible replacement turbo-chargers. We carried out a layout design study to establish the viability and consequences of replacing the existing turbo-chargers with the new options. Modifications would be required to a number of components including the engine exhaust manifold, air inlet and air outlet ducts, exhaust duct, lubricating oil pipes and support bracket. Because of the complex shapes and limited space available, all layout work was carried out in 3D using Autodesk Inventor CAD software.

The work we carried out allowed Allen Diesels Ltd to accurately cost the upgrade package and present a detailed proposal and presentation to their customer.

An owner of an old Allen engine made an enquiry for a new cylinder block. His particular version of the engine had been out of production for a number of years and replaced with an improved and uprated version. Producing a block to the original design was possible but the pattern equipment for the casting was no longer in existence. Producing new equipment would be extremely expensive for a one off making the cost of the replacement cylinder block unviable.

The only feasible option would be to manufacture the new cylinder block using the current design of casting. Although the design was similar, the new version had been uprated and modified in a number of areas so an investigation would have to be carried out to see if this was possible.

Initially we carried out a detailed comparison between the old and current design highlighting all of the differences. Some of the cast walls and features were significantly different so further checks had to be made to ensure there would be no clashes with other engine components.

It was established that with some modifications it would be possible to make the current design fit the old engine. We produced a set of new machining and assembly drawings for the hybrid design.

An existing Allen Diesels customer, already running a number of engines which were supplied a few years earlier, ordered an additional V12 engine. Although it would be a very similar build configuration to the existing engines, a number of small but significant improvements and upgrades were offered.

The parts manual supplied to the customer required updating to reflect the changes to the latest engine and we produced the relevant illustrations and parts lists.

Before the engine was despatched it had to be tested and we produced all the necessary layouts and detail drawings. These included exhaust duct routing and supports details, an engine foundation chocking arrangement, layouts to position auxiliary units (coolers, filters etc.), temporary hose layouts and various fabrication details (pump skids etc.).

This website uses cookies to improve your experience while you navigate through the website. Out of these, the cookies that are categorized as necessary are stored on your browser as they are essential for the working of basic functionalities of the website. We also use third-party cookies that help us analyze and understand how you use this website. These cookies will be stored in your browser only with your consent. You also have the option to opt-out of these cookies. But opting out of some of these cookies may affect your browsing experience.
Necessary Always Enabled

Any cookies that may not be particularly necessary for the website to function and is used specifically to collect user personal data via analytics, ads, other embedded contents are termed as non-necessary cookies. It is mandatory to procure user consent prior to running these cookies on your website.